We were at dinner, discussing curry and popadoms, school outings and pottery classes, when my oldest said:

"There aren't many things that you can know absolutely for sure, are there? I mean, most things we 'know' are just what people THINK."

Ah, the subjectivity of knowledge, that old chesnut.

'No, but,' he says, 'that's just a way that WE have found to measure and understand certain things. I mean, if you went and talked to some aliens from another planet, perhaps they wouldn't think like that, maybe they would measure things by SIZE instead, or something like that. We don't know.' 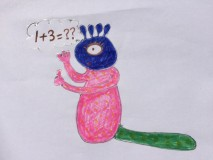 So I showed them this funny clip from Friends, in which Ross and Phoebe argue the toss on gravity and evolution. If you haven't seen it, watch it here - it's a good one.

And a bizarre by-thought I had was: maybe I should start watching TV with the kids? Our TV has been entirely made over to the Xbox and Minecraft - we never watch TV together, but it could be fun.

And I think about all the things we think we know - or ought to know - as parents, and as humans.

And how, not so many years ago, they could barely pronounce their own names. And now here we are.

Have a good week.